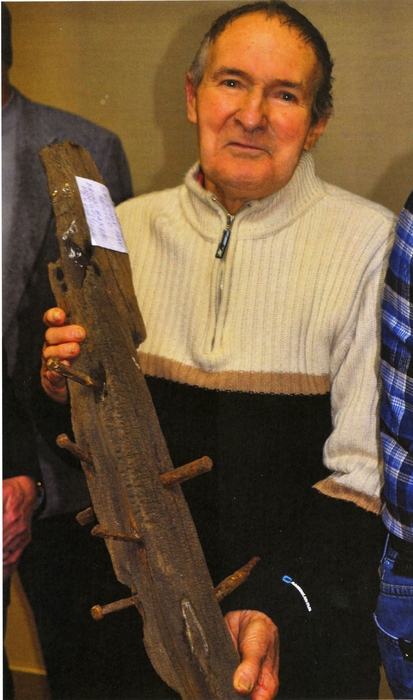 Long time Innisfil resident, and past president of the Innisfil, Simcoe County and Essa Historical Societies passed away on April 21, 2016. Brian’s contribution to local history research in our community was invaluable. Brian was sure to cheer any room he entered with his warm smile and eyes sparkling. He has the distinction of presiding over not one, but three Historical Societies, and was a great resource of information to inquisitive friends and researchers. He was rarely without one of his dogs in tow, and he volunteered his and Spooky’s time as a therapy dog. From his time writing for the Barrie Examiner to his family to his knowledge of local history; his friends remember him fondly.

"I recall Brian quite fondly. Back in the 1980s when I worked at the Barrie Examiner, I would visit with Brian weekly when he dropped by with his negatives and typewritten story for his column. He always had something interested for me to edit, and he always had a bright story and a laugh about some current happening in his life. Readers loved the column too, which we called Rural Routes. He wrote about subjects as varied as wildlife and plants, the changing seasons, hiking on the Bruce and Ganaraska trails, cadging a “lift” on a railway train, even poking around the remains of the Hog’s Bay Trestle (I think he may have kept a little piece of the bridge, scavenged from the demolition site).

His photos shone a light on people and places from across the region. Sometimes they featured his son Jimmy, occasionally his wife Marg, and many times one of the succession of dogs in whose company he also revelled.

Brian often told me that the best ideas for his newspaper stories would come to him while milking the cows on his Innisfil dairy farm. And he was always amazed at how some of his most popular columns were the ones that “were about nothing, really.” There were stories that painted pictures about daily life on the farm and around his neighbourhood – they weren’t news stories but they were little glimpses of life that truly resonated with all his readers."

"I will miss my friend Brian. He was a gentleman! He and his wife Margaret were quite a pair. I invited them to a meeting at my house to show pictures of Innisfil to a newly formed ACO group. Their picture show was excellent! We all enjoyed it very much. Then I asked Margaret if she thought that the Innisfil Historical Society would like to join us in an event called “ Junk or Jewels”. After asking her executive the answer was yes. We would split the proceeds was the arrangement. Well, in the end Marg gave us all the money that was made and we were very grateful. Any time I phoned to ask a question about something about the history of Innisfil I was always given an answer almost instantly. Then a few years later I had the pleasure of interviewing Brian and Margaret for the “Our Stories” Innisfil Library project. The two of them sat and watched and listened to each other. You could tell that they loved, admired each other deeply. It was wonderful to listen and watch them. When I visited Margaret in the hospital in Orillia, Brian was there with Spooky. The patients were so happy to see him and Marg was very proud of him. I told Margaret before she passed away that the IHS were intending to award Brian their highest honour. Marg was very pleased for him and promised not to tell him. Brian was very happy to see me at RVH when I popped in. He missed Spooky but was practical about the fact that he had to face reality. He enjoyed Roberta Place and made the best of his situation. I won’t forget how kind Brian and Margaret were to me when I was a new member of the IHS. He was very proud of his Grandchildren and enjoyed their visits especially when they brought Spooky along. I will remember Brian’s smile always. His whole face lit up and his eyes sparkled."

Both Brian and his wife Marg were interviewed for our oral history project. The amount of community memory shared by the Bakers was a wonderful gift. You can watch more interviews with Brian and Margaret by visiting our section on Oral History.

“What can you say about Brian.......what a sweet, kind, gentle human being. Brian could tell some really amazing stories about people he had met during his many years of videotaping, photographing and interviewing people. He will be missed, but never forgotten!"

"I smile when I think of Brian. I was told of a time when he was to give his talk on "Flora & Fauna of Simcoe County" Margaret accompanied him to the meeting. Brian knew exactly where the flower photo was taken ( Creemore for example)but each time he was asked its name, he would  have to ask Margaret to see if she could recall! Sometimes neither knew."

Read more reflections on the life, freindship and contributions of Brian Baker in the special edition of Innisfil Notes published by the Innisfil Historical Society in May. Click Here.