A History of the Innisfil Municipal Heritage Committee 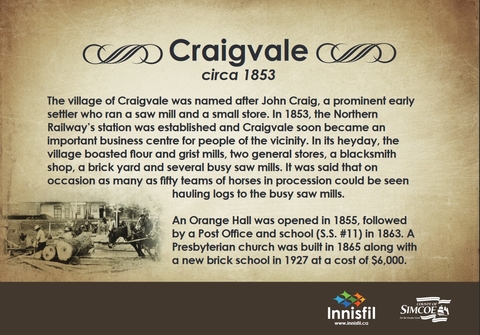 In March of 2003, Council adopted a report establishing the Innisfil Municipal Heritage Committee and so the process began. It took until February 2004 for the Terms of Reference to be developed and the first Members to be appointed by Council to the committee. The committee was designed to consist of two representatives of the Innisfil Historical Society, a representative from the Knock Community Centre Board and an Innisfil resident from the community at large. The first members were Audrey Miller, Doug Warrington, Robert Rymell, Andrew Cowan with Paul Wylie, Manager of Parks & Recreation/Programs and Development representing the town and Mayor Brian Jackson representing Council.

The mandate of the Committee as stated in the Terms of Reference:

The first official meeting of the Committee was held 14 December 2004 at which point, Rymell was appointed Chair.  Paul Wylie agreed to provide secretarial duties to the committee until a member of the Clerk’s office was appointed to provide support. Along with other housekeeping items, the committee recommended an operating budget of $3,000 per year beginning in 2005.

With each new subsequent Council, a new committee has been struck and a Chair has been elected by the members as follows:

Members of the Committee drove around Innisfil, identifying many properties of potential historical significance.   With the creation of the Simcoe County Branch of the ACO (Architectural Conservatory of Ontario) additional support and expertise was available to the Committee.  Members of the ACO Branch provided architectural advice, analysis and support as the Committee sought to preserve key properties in Alcona.  The ACO Branch members produced articles for the local newspapers and newsletter, made presentations to historical societies, businesses and community organizations to promote the preservation of historical buildings, and raise the awareness of local citizens and municipal leaders.

Properties added to the Registry are not designated but are added if, on the advice of the Heritage Committee, Council believes the property to be of cultural heritage value or interest. Once a property has been listed, property owners are required to give the Town 60 days’ notice of any intention to demolish or remove a building or structure on the property.

In January 2010 upon recommendation of the Committee, Council approved the addition of all of Innisfil’s churches and cemeteries to the Heritage Register.

Based on recommendations from the Committee, between 2010 and 2019 Council also approved the addition of the following properties to the Heritage Register:

Properties Designated under Part IV of the Ontario Heritage Act:

This farmhouse is a marvelous example of Georgian style architecture and has all the classic elements. The main house has been built in a “T” formation with a rectangular-shaped building in front and two other sections in line behind it. The main structure has a chimney at either gable end of the roof (one of which has been replicated) and there is another chimney at the end of the second rear section.

The farmhouse is constructed of solid brick (which were crafted from clay found in the adjacent field) and the walls are three courses deep. The bricks on the front of this farmhouse have been laid in the “Flemish Bond” pattern while the other sides of the home have the normal “Common Bond” pattern. The red bricks are offset by buff colored bricks in the lintels, on the quoins as well as in a solid band running across beneath the second story windows. The brick chimneys are intricately patterned as well.

The Sawyer family built the house in 1867 and it has been owned by four generations of Sawyers, with Lloyd Sawyer and wife Isabel (Shipley) being the last to occupy this property until 1953. It was then bought by the McQuarrie family who produced mixed crops of hay, wheat, oats and corn to feed their dairy herd of Guernsey cows whose milk was shipped to Silverwoods Dairy in Toronto. The farm was then owned by the Fermo’s from 1987 to 2006. They continued the farming tradition by growing hay and raising beef cattle.

The Knock Community Centre, formerly the Knock School, was built in 1902 by William Taylor of Allandale on the site of a log and frame school built in 1871 by Stephen Maneer. It is the only school site in Innisfil that is essentially unchanged from its original use. It is also a well-maintained example of late 19th/early 20th century Ontario schoolhouse design.

The Knock School was purchased in the mid 1960's from the School Board and became known as Knock Community Centre. This is the only school site in Innisfil that is essentially unchanged from its original use. Description of the heritage attributes:  The School House is a one room brick building with full basement, rectangular in design, with a high-pitched gable roof and a bell tower on top.  The bell and bell tower are original to the building. The entranceway/cloakroom attached to the front has separate doors for "Boys" and "Girls" reflecting the practice at the time of the building's construction. Additional original features include the high ceiling, wood trim, wainscoting, hardwood flooring, external trim, and the position of the blackboard across the front with one on each side between middle and front windows.

The Cross House survives as one of the earliest and best examples of a settler’s first permanent farmhouse. The main structure measures 36 feet long by 28 wide. Original architectural features including the rubble stone walls; the 12 over 8 window sash; the presence of original trim and doors on both floors, all add to the heritage value of this unique example.

This 1850s stone farmhouse is one of the last remaining early buildings in Innisfil and has survived as a landmark in the community since its construction. It stands as a testament to the hard work and building skills of early settlers in the area. The solidity of its construction, the fact that it remains virtually intact, and its history relating to one of the earliest and most important families to settle in Innisfil, makes this one of the community’s outstanding structures and a resource of great value.

William Cross and his wife Mary Allan originally homesteaded on this property and it had been continuously owned by his descendants until 1947. The Allan’s and Cross’s were among the eight original families who moved to Innisfil from Dalhousie Township, just as settlement was beginning to gain momentum in the early 1830’s. The other families comprising of Duncan, Jack, Wallace, Lawrie, Todd and Climie were known as the “Dalhousie Settlers” and were highly active as public speakers, social reformers and political activists.

When Innisfil was first organized as a Township in 1850, William Cross became the first Reeve. Four descendants of “Dalhousie Settlers” have since been Reeve of Innisfil and two Wardens of Simcoe County,

William and Mary were among the original members of the 6th Line Presbyterian Congregation in 1838. In 1844, the church was built and William was a “precentor”.